Monthly Payment Ratios, May 2013: Homes May Not Be Cheap, But Mortgages Sure Are

I recently updated the price-to-income
and price-to rent-ratios for San Diego single family homes.
I think these are the best metrics to determine whether homes are
overpriced or underpriced based on their fundamental economic
underpinnings.

It’s also interesting to look at the ratio of monthly payments
to incomes rents, but for a different reason.  I’ll get into
this in a moment, but first let’s check out the graphs: 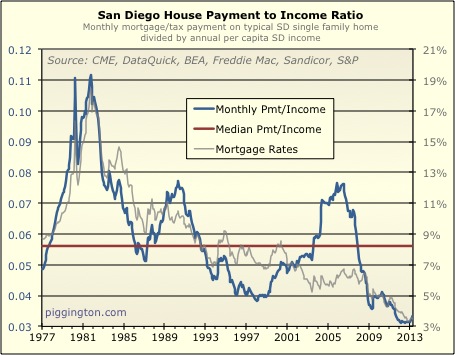 The recent price increases have just been a blip compared to the
incredibly low level of interest rates.  The payment-to-income ratio
is 41% below the historical median, and the price-to-income ratio is
38% below it.

In my view, it is erroneous to use these graphs in support of the
argument that “housing is cheap.”  The payment-based ratios
combine home prices and mortgage rates to tell you how good a deal
you are getting by financing a home at that particular time.
But if the question is whether homes are cheap or expensive on a
long-term, sustainable basis, interest rates don’t really figure
into it in my view.  Rates can go up and down over time, but it
is incomes and rents that will determine how much houses are
intrinsically “worth.”  I guess another way to put it is: low
rates help, but only for as long as they stay low.  (And when
they have nowhere to go but up, one could even argue that that is a
source of potential downward pressure on prices in the future).

Just to emphasize the point — according to the payment-to-income
ratio (if one were to try to use it as a valuation metric), houses
were more “expensive” in 1985 than in 2006.  In fact, the price-to-income
ratio shows that housing was dirt cheap in 1985, and absurdly
overvalued in 2006.  (In case the below graph isn’t convincing
enough, consider the subsequent price changes in each case).

So the payment-based ratios don’t justify the view that houses are
cheap.  However, they do tell us that if you are financing a long-term
home purchase with a fixed-rate mortgage, you are pretty much
getting the deal of a lifetime.