Shambling Towards Affordability: May 2013

With recent robust price increases has come a resurgence of talk about a
bubble.  Whether a given investment is in a bubble or not may
depend on many factors, but in my mind, the most important of these
is valuations.  If valuations (properly measured) do not show
the asset to be extremely overvalued, then you probably aren’t
dealing with a bubble.  This is not to say the asset can’t go
down in price — not at all.  It’s just to say that it’s not a
proper “bubble.”

So what are valuations telling us about the state of the San Diego
housing market right now?  Let’s have a look at the two most
important ratios that have guided us through this boom and bust: the
home price to income ratio, and the home price to rent ratio.
These ratios compare home prices with two real-world fundamental
underpinnings: how much potential home buyers earn, and how much it
costs to rent (put another way, how much it costs to not buy).
Over time they have tended to “mean revert” around a middle of the
road value which we can roughly say represents the fair
value for San Diego housing.

Let’s start with the price-to-income ratio: 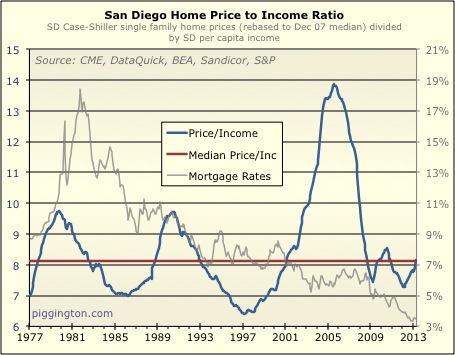 As it happens, the current p/i ratio stands almost exactly on top of
the long-term median value (less than 1% above).  This surprised me
a bit, given the recent jump in prices.  But the last time I
updated this graph at the end of 2011, prices had gotten a decent
amount below fair value.  So, prices had a bit to rise to get
to fair value, and nominal incomes have done some of the work by
rising that entire time as the economic recovery has plodded
along.

Homes look just a little pricier based on the price-to-rent ratio:

Here, they are 6% above their historical median.  This is
actually not terribly far from the p/r ratio peaks in the early
1980s and 1990s, but it is nothing like what we saw during the
bubble in the mid-2000s, when the p/r ratio reached 83% over the
median.

Next up, a look at the monthly payment ratios…

April 2013 Data Rodeo: Rock-Bottom Inventory and Rising Prices, Again Monthly Payment Ratios, May 2013: Homes May Not Be Cheap, But Mortgages Sure Are