April saw a continuation of what we saw in March: fairly strong
demand, ridiculously constrained supply, and rising prices.

Starting with the latter, the median price per square foot for
single family homes rose 2.6% last month.  That makes for a
year-over-year increase of 19.5%!  The condo price/sqft was
actually down for the month, but that doesn’t mean much considering
last month’s moonshot.  I tend to ignore the condo series due
to its volatility, but for what it’s worth, the median condo
price/sqft is up 26.9% since last year, and the detached/condo
aggregate figure is up 21.3%. 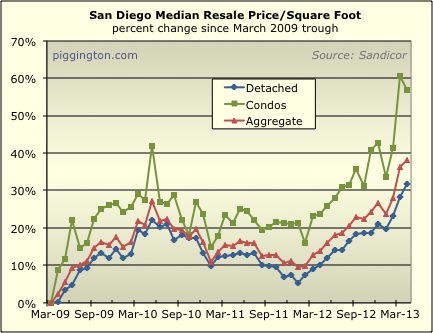 Now, I strongly suspect that a portion of the recent price rise
represents a shift in quality, as opposed to actual price
increases.  In other words, people are buying nicer stuff than
they were — that would be the quality shift part.  The
“actual” price increase part is that they are also willing to pay
more for a home of a given quality than they were before.  I
don’t really have any idea what the mix is, but I suspect that
quality shift plays a role because:

We will only know the real situation with the release of the
Case-Shiller index, which largely addresses the quality issue by
measuring each home’s price against the prior sale of the same
home.  In the meantime, here is my “estimate” of the
forthcoming CS numbers, calculated very simply by taking a 3-month
average of the detached home price/sqft.  (CS uses 3 months of
data, and only looks at detached homes).  This technique has
actually worked quite well up until now, but for reasons noted
above, I suspect this estimate is overstating the price increase
over the last couple months.

Here are the same two graphs as above, starting from the housing
bubble peak:

Moving on to supply and demand, sales were pretty solid — the best
April in many years, but not by a dramatic degree:

As has been the case for a while, the real “drama” has been in the
lack of inventory.  Inventory was pretty flat for the month,
but sits at what is a very low level comparative to previous years:

If we take out the contingent inventory (mostly short sales with
offers waiting for bank approval), inventory did nudge up a tiny
bit, but is still exceedingly low:

This longer-term graph of months of inventory (unfortunately this is
as far back as the data I have goes) shows just how extreme the
decline has been:

As I’ve often discussed, months of inventory is highly correlated
with short-term price movements.  Over the course of data I
have, 6 months of inventory has tended to mark the line between
upward and downward pressure on prices.  This can be seen in
the chart below, which marks the 6-month level with a thick black
line (the months of inventory figure is inverted in order to make
the correlation more clear).  Also clear from the chart is the
strong relationship between prices and months of supply in
general.  The recent price increase was well predicted by the
relentless decline in months of inventory:

(BTW, I’ve noted this before, but I want to mention again that the
idea for this graph came from the extremely informative Calculated

As compared to the historically neutral level of 6 months of
inventory, we currently stand at just 1.9 months.  If the above
relationship remains intact, that is obviously an auspicious sign
for home prices in the near term (and a depressing one for potential
buyers).

As for the long term, that will be dictated by things like the
economy, rates, and of course valuations.  On that last point,
I intend to finally update my valuation ratio graphs soon (I
really mean it this time).  Stay tuned.