Prices increased last month, but at a slower pace than the
springtime frenzy: 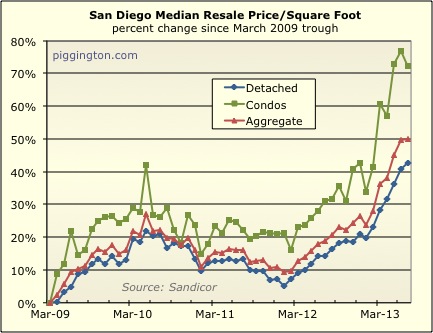 Ignoring the wildly volatile condo series, the price per square foot
for detached homes was up 1.3% for the month.  That’s actually
a decent clip, but quite a bit more modest than the 3-4% increases
we’d been seeing for several months prior.

Here’s a look at the Case-Shiller Index in blue, followed by my
estimate of same in red.  This averages 3 months of data, so
you don’t really see the deceleration in this chart like you do
above.

Here are the same two charts starting at the bubble peak:

And here’s the regular median (not median price per square foot)
starting at the peak — not as good a price indicator as those
above, but perhaps interesting:

…though there has been some easing in pending sales over the past
few months:

This implies that sales activity may back off slightly, but it’s
still at a very robust level.

I guess the recent price runup lured some folks into putting their
homes on the market, because inventory jumped pretty
significantly.  While still quite low on an absolute basis,
active and contingent inventory increased by 9% in July alone:

If we exclude contingent inventory (which we arguably should,
because those homes are already “spoken for” and awaiting bank
approval), we see that active inventory increased even more rapidly
at 16% for the month.  We are actually back at year-ago levels
in the active category:

Here’s a long term chart of active and contingent inventory… this
shows that the increase, while sizable in percentage terms, doesn’t
really get us out of “undersupplied” status.

Months of inventory increased a bit:

And here’s the long-term chart of months of inventory, showing that
this increase is really a blip and that we are still at very low
levels historically:

This is important because months of inventory has a very strong
historical correlation with price changes:

While the frenzied priced increases of past months are not likely to
continue, the level of inventory is supportive of further price
strength.

There is a significant wildcard in the mix, of course… and that
would be the recent increase in mortgage rates.  I doubt we’re
actually seeing much of the rate increase in the graphs above…
they concern sales that closed in July, which means that most of the
contracts were probably signed in May and June.  As the below
graph shows, rates weren’t far from their typical range for most of
that period:

So, the more abrupt part of the rate increase won’t even show up
until the August closed sales, and the full brunt won’t be seen
until September’s sales.

I would guess that the combination of rising rates and increasing
inventory will put an end to the recent quasi-frenzy
conditions.  But, inventory is still quite low.  And while
prices are getting a bit stretched compared to their fundamentals,
it’s nothing like we saw during the bubble, and interest rates are
still extremely low by historical standards.  This means that
even with the recent rate bump, monthly payments are historically
quite low.  So no more frenzy, maybe, but perhaps a
normalization to a more balanced market if rates stabilize at this
level.  Let’s see what happens…