As I mentioned last in last month’s rodeo, the full effect (whatever
that may be) of the recent rate increase won’t show up until the
September data.  Thus, the August data presented below is kind
of a transitional phase… higher rates will have affected some of
these sales but not all.

With that said, home prices continued to climb: 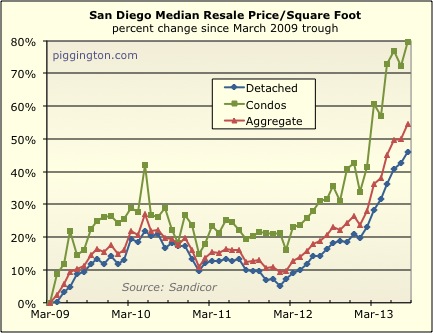 The volume of closed sales was decent:

However, pending sales declines noticeably during what is usually an
up month.  Unlike the closed sales, which represent deals
usually made a month or two prior, pending sales show how many homes
went into escrow in August.  Clearly, some combination of
higher rates and the recent price rise has caused demand to pull
back a bit.  Given the suddenness, and the fact that prices
have been rising steadily, I would ascribe more of the decline to
rates.  Perhaps this is the first sign that they are biting a
bit.

Inventory increased again, as higher prices seem to be luring
sellers to the market.

Active inventory in specific is now rising at a pretty good clip, as
the amount of contingent has been dropping recently:

Months of inventory seems to have turned up now, but remains at a
very low level:

And months of inventory continues to do a decent job of tracking
price pressures.  This graph shows that while the level of
supply vs. demand is moving toward being more balanced, it’s still
at a level that has typically led to higher prices immediately
ahead.

Of course, both supply and demand could shift pretty substantially
based on the abrupt rise in rates, not to mention the roughly 25%
increase in prices (per the price per square foot, anyway) over the
past year.  The market remains quite under-supplied for now,
though, at least as of last month.  It will be interesting to
see the full effect of the rate increase when the September data
comes.