Folks, sorry this has taken me so long.  When urbanrealtor
starts offering to buy me booze just to get the monthly charts up, I
know I’ve been a huge slacker even by my own lofty standards of
indolence.

So without further delay, let’s do this.  Starting with the
median price/square foot, we see that the rapid price apprecation
we’ve seen all year finally took a breather over the past couple
months, with prices by this measure flattening in September and then
falling in October. 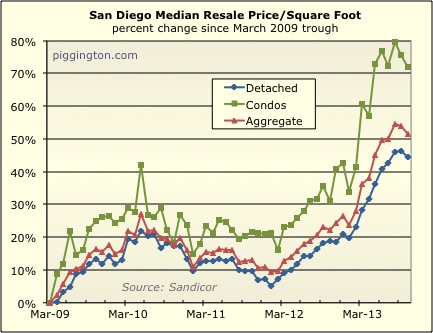 Same thing from the peak:

Here’s a look at the Case-Shiller index in blue, and then an
estimate of same over the last couple months in red.  Due to
the 3-month smoothing employed in this calculation, this price
indicator was still rising as of October.

Sales volume has actually been pretty good… not quite as high as
last year (which lead into this year’s price ramp) but not too bad
considering the big jump in rates.  That said, you can see that
rates did seem to have an effect, because volumes were at multi-year
highs right up until rates really started to bite:

Inventory flattened out, but given that this time of year typically
seen a decline, I would interpret that as indicating some upward
pressure on inventory.

And if you take away contingent inventory and just look at active,
it was still rising over the past couple months, though not as fast
as previously.  However, this is quite a bit different from
recent autumns:

So you can probably make a pretty good case that inventory is coming
out of the woodwork now and has probably bottomed.  It must be
noted, though, that this increase is coming off a very low base, so
inventory continues to be quite low despite the recent increases.

Months of inventory is accordingly still quite low, right where we
were at this time last year:

This longer-term chart shows that months of inventory is also very
low historically, despite recent increases:

Here’s the chart I like showing the correlation between months of
inventory and price changes.

As months of inventory (the blue line, which is inverted) has come
off its lows, the rate of price increases has dropped quite quickly
(though is still positive since I am using the Case-Shiller index or
my proxy thereof for recent months).  But it should be noted
that months of inventory is still comfortably above the level that
has typically distinguished between upward and downward price
environments.  (This general vicinity is shown by the thick
black line at 6 months inventory).

So while the market appears to be taking a higher-rate-induced
breather from the frenzied conditions of earlier this year, the
chart directly above shows that demand is still strong and supply
pretty weak.  The direction of the trend may have changed, but
the absolute levels seem to be what matter when it comes to months
of inventory — and the current level suggests that price pressures
remain to the upside for now.

The idea behind the months of inventory chart is that it gives an
idea of current supply and demand, and thus price pressure.  It
really doesn’t tell you a thing about the long-term prospects for
housing or whether prices are sustainable.  In my view, the
better way to do that is to compare prices to the long-term
fundamentals such as area rents and incomes.  I’m planning to
update those charts in the not-too-distant future… if urbanrealtor
starts offering to buy me drinks again, I’ll know it’s taking too
long.