I had a chance to update the valuation info. There shouldn’t be any big surprises here based on what I’ve been posting in the regular monthly threads. The good news is that I can reinstate the “shambling towards affordability” title for this series.

As a reminder, these valuation ratios attempt to measure the fundamental expensiveness of San Diego housing by comparing home prices or monthly payments to a combination of SD rents and per capita incomes.

The small apparent purchase price decline, combined with the upward march of rents and incomes, has resulted in a slight retreat in purchase valuations. Emphasis on slight; this ratio is still not terribly far off bubble-peak levels. 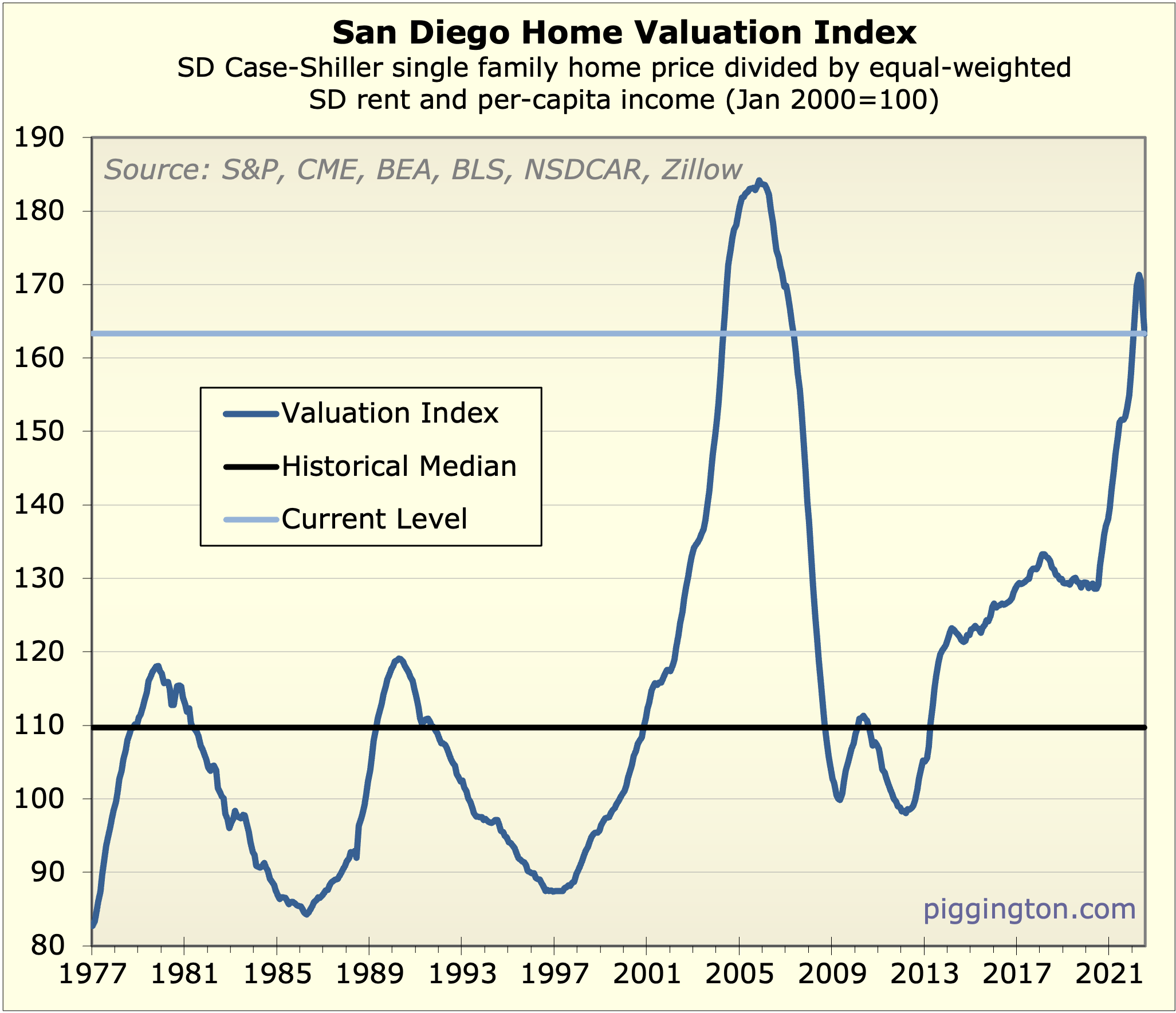 This next chart shows the same thing except that instead of measuring purchase prices, it measures monthly payments. Until recently, this figure was nice and low as a result of very low mortgage rates. Not so much any more. Here there is some more distance from the bubble peak, but we’re still well above anything seen outside the housing bubble and the high-rate 1980s.

My feeling is that the red line in this chart is likely to come down. I don’t see monthly payments at this level as sustainable. The monthly payment ratio could come down by some combination of mortgage rates declining, prices declining, and rents/incomes catching up to prices. I don’t have a strong view on what that combination might be. But I do suspect that one way or the other, that red line is coming down.

Clearly I have less of a view on prices themselves. I think it’s a reasonable base case that they will decline, as they seemingly already have to a degree: they went up a ton in a very short time, and one of the tailwinds of that scorching rise (super low rates) has turned into a headwind. So of course, prices could decline and nobody should be surprised if they do.

But I’m open to the possibility that if things play out just so, there could be little or no price decline from here. For instance, if inflation/rates were to drop quickly without a serious economic downturn, home prices could meander along while rents and incomes catch up. But there’s a lot that could derail that scenario — stubborn inflation, a recession, or the knock-on effects of the (in my opinion) still only half-burst bubble in US growth stocks, to name a few.

So, I don’t so much have a price prediction here, but rather a view that San Diego housing is “priced for perfection,” or at least for a very good economic outcome. We might get lucky and get that good economic outcome. But we might not, and I don’t really think anyone can reliably predict where we’ll end up on that spectrum. Hence, my view that the future path of prices is fairly uncertain.