Prices flattened out or maybe declined last month, depending on how
you want to look at it… while the much less volatile detached home
median price per square foot actually rose by .3%, the condo median
ppsf declined by 3.3%, leading to an aggregate decline of .5%. 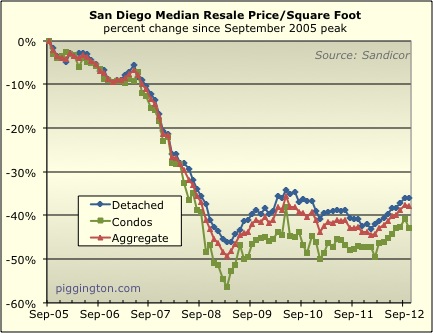 The above chart begins at the bubble peak; for kicks I made one
starting from the 2009 trough:

You can see what I mean about much greater month-to-month volatility
in the condo ppsf.  For what it’s worth, I tend to pay a lot
more attention to the detached home series for that reason.
The detached numbers can be further smoothed by taking the 3-month
average, which I have done in the chart below in an attempt to
approximate what the Case-Shiller index (which also uses the 3-month
average for detached resale homes) will show when it comes out:

Now let’s move on to inventory, the lack of which has been helping
out prices all year.  As is typical this time of year,
inventory has been falling — what’s unusual is that it does so from
such a low level:

Here’s how things look if we just chart actives:

Note that there is about half as much active inventory as there was
a year ago!  And yet, sales volume is the highest (for October)
in at least three years:

As a result, months of inventory is plumbing new lows:

Here’s the chart I’ve been emphasizing that shows the strong
relationship between months of inventory and prices:

Prices do tend to weaken in the fall and winter months, but I
wouldn’t expect much of a price decline for as long as months of
inventory remains so exceedingly low.