Alright, let’s take a look at the resale data for November…

Here’s a look since the March 2009 trough.  Note that both
series are now very close to their prior post-crash highs during the
2010 stimulus-fest. 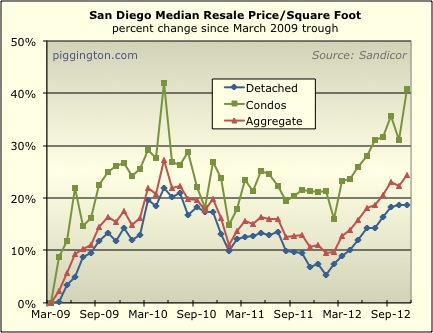 And here’s an update of the Case-Shiller proxy, which continues to
rise steadily and is also near its 2010 high:

The percent of inventory that is “contingent” (usually a short sale
awaiting bank approval) hit an all time high of 45% (that is
contingent accounted for 45% of active + contingent).  Every month since June, there have been more contingent condos than active!

Here’s a look at just active inventory, i.e., that which is truly
available for sale right now.  This has simply plummetted — it
is down over 60% from 2 years ago:

The months-of-inventory vs. price changes chart continues to show
months of inventory near the lows (highs on the chart), which is
supportive of prices until such time as inventory loosens up or
demand declines.

Below is the typical assortment of extra charts…