The price valuation index looks not too different from the last
update. It’s crept up a bit, but it in the same (albeit historically
quite high) ballpark. 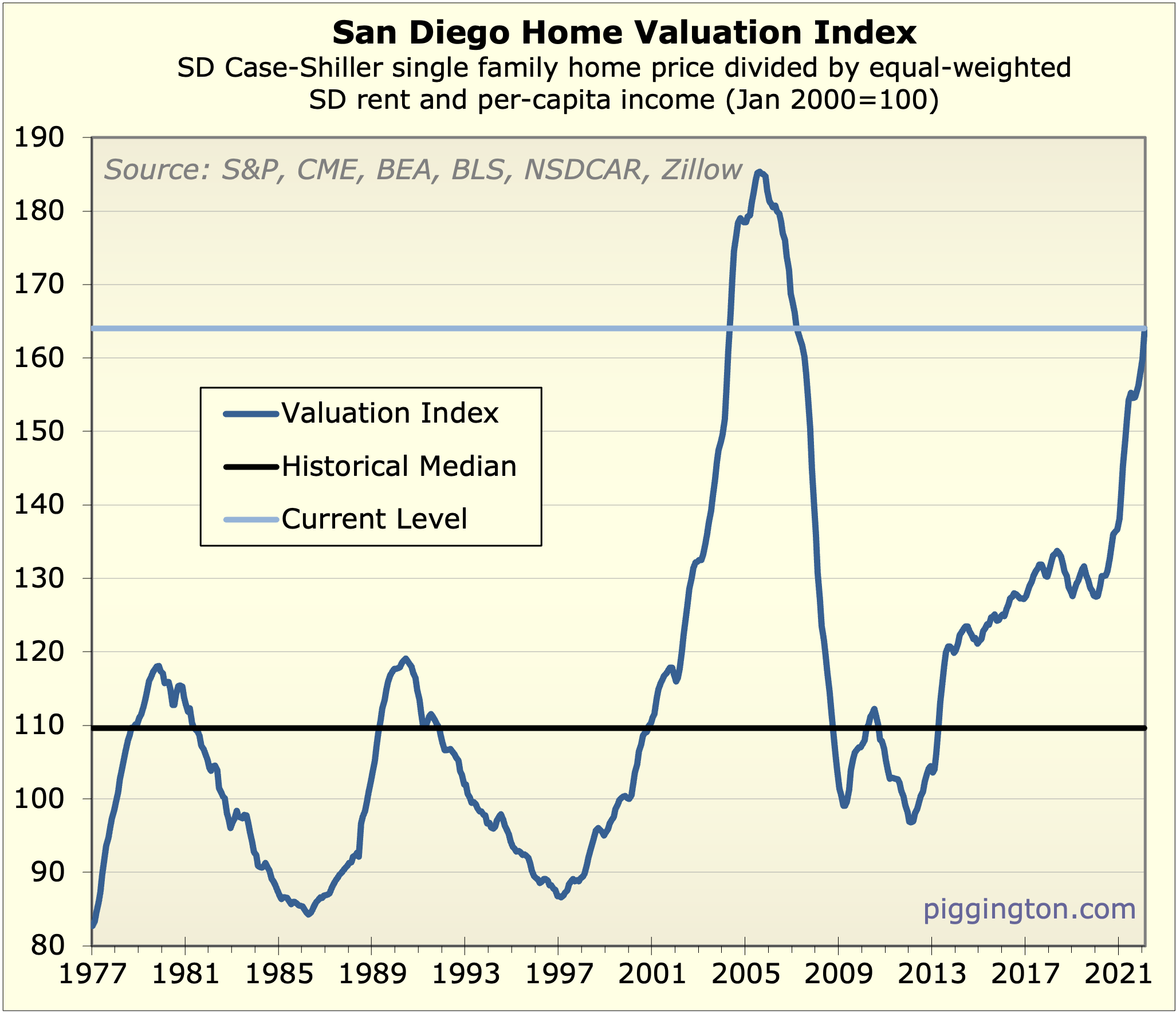 The monthly payment index, on the other hand, looks quite different
thanks to the recent pop in rates. The red line below shows that the
ratio of monthly payments to local incomes and rents has exceeded
its post-crash highs, and is now at a level last seen in mid-2003. 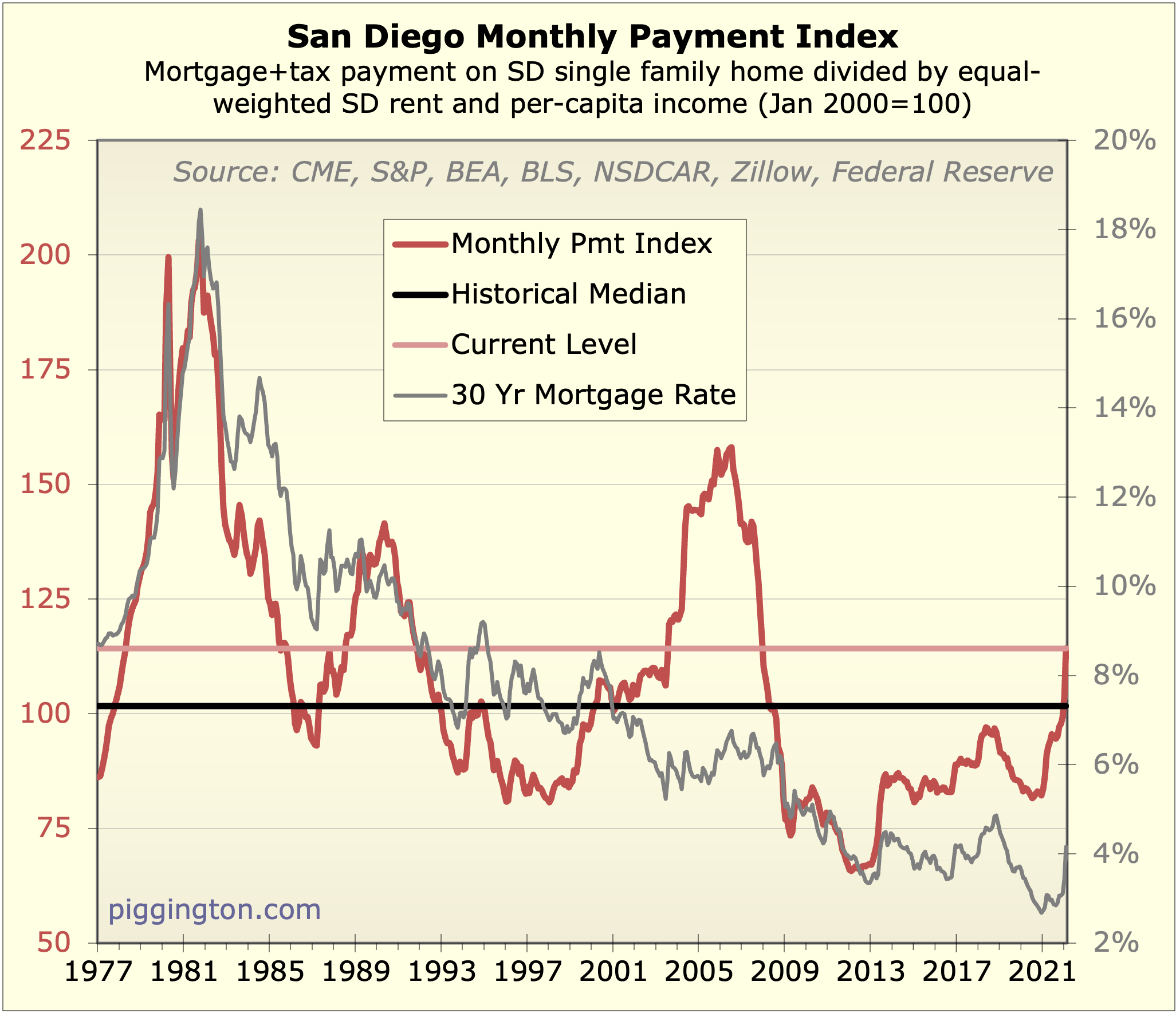 Up until recently, you could make the argument that despite sky-high
purchase prices, low rates were keeping the monthly nut pretty
reasonable. It’s a lot harder to do so now, and with inflation still
running in the high single digits, there seems to be a good chance
that it will become harder yet.

This seems unhealthy to me. I realize that there is nothing for sale
right now, and that the mismatch of demand and supply is pressuring
prices upward. Further out, I worry about the sustainability of
these prices and this level of affordability. I will note that we’ve
blown right past the affordability level that, when reached in 2018,
ushered in a mild housing downturn that lasted until rates declined
again.

I do think there is something to the idea that San Diego has had a
permanent shift upward in value due to the remote work revolution. I
suspect that might count for around 10% of the price increase,
though.* If you back that extra 10% out, we are just a few percent
above the historical median for affordability, although we are
almost 10% above the levels that coincided with the 2018 slowdown.

On a gloomier note, I still suspect there is a lot of bubble money
giving things a boost that, from the looks of things, may not be
long for this world.

There are a lot of moving parts and much that is unknown (as ever).
But we do know this: valuations are really high, and the “it’s ok,
rates are low” offset has just taken a major hit.

* I came up with this 10% number based on this very sophisticated
methodology: since Jan 2020, home prices in San Diego have gone up
10% more than the nationwide average (per Case-Shiller).

** Also note – I took a couple of liberties with the above
graphs. First, I am starting to re-integrate the use of CPI rent.
I just felt weird switching from a measure of new leases (Zillow
Observed Rent Index) to all leases (CPI)… it’s kind of apples
and oranges. On the other hand, due to the eviction moratorium and
the speed of the increase in rents, it really just wasn’t showing
up in CPI. So what I’ve done is to blend the two together, using
only ZORI at first, and blending in CPI in an increasing
proportion so that it will be all CPI again by mid-2023. I figure
3+ years should be enough for CPI to have fully digested whatever
is going on.

The second thing is that for mortgage rates, I used the most
recent weekly figure for the last observation in the chart (as
opposed to using the monthly figure for Feburary). This is kind of
similar to the issue with rents — rates changed so quickly that
we’d be missing out on info if we used the usually lagged/smoothed
sources, so I wanted to use the latest data available.