Below you will find updated charts showing how San Diego home prices
(and, further on down, monthly payments) stack up against local
incomes and rents.

Longtime readers know that I consider the price ratios to be
absolutely fundamental to determining whether housing is fairly
valued.  It makes intuitive sense that home prices would tend
to track incomes and rents: incomes, because they determine how much
money people have available to pay for housing; and rents, because
rent prices reflect how much San Diegans are willing and able to pay
to put roofs over their heads when there is no speculative or
investment element involved.  The historical record bears out
this intuitive logic, as San Diego’s home price-to-income and
price-to-rent ratios have tended to be strongly mean-reverting over
time.

Of course, there are other factors to take into account, such as
employment trends, rates, and divergences between the various
sub-markets that make up the aggregate numbers.  But these
ratios represent a good starting point in determining where the
market stands from a valuation standpoint.

The first chart shows the ratio of the typical San Diego single
family home to San Diego per capita income.  (Median household
income would be better but there’s less data available — however,
having charted the data that is available, there is actually very
little difference in the ratios whether they are based on household
or per capita incomes).  The price to income ratio is in blue,
with historical mortgage rates charted in gray to provide context,
and the historical median price to income ratio (what we might
somewhat simplistically designate as “fair value”) in red. 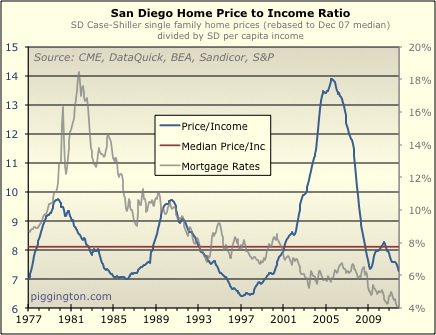 After the stimulus-driven bounce out of early 2009, the price to
income ratio has declined to 7.3.  This is a new post-bubble
low, and is 10% below the historical median.

The next graph shows the ratio of the typical single family home
price to average San Diego rent.  The price to rent ratio sits
at a more modest 4% below its historical median.

San Diego homes, then, are undervalued in aggregate based on these
ratios.  But not dramatically so.  The following table
lists the extremes in these price ratios in the three real estate
cycles that have taken place since the 1970s:

We can see here that, despite the comparative vastness of the most
recent boom, neither the price to income nor price to rent ratio has
fallen as far below the median as they did in the two prior
busts.  Of course, there is no guarantee that they will do so,
especially since the government is supporting housing to an
unprecedented degree.  But given the tendency for overshoot
along with a raft of challenging economic considerations — shadow
inventory, weak employment, and a potential interest rate shock
spring to mind — I think the odds are fairly good that these price
ratios will decline further still.  (Whether that translates to
significantly lower nominal home
prices is up for debate, but that’s another topic entirely).

Changes to the monthly payment-based ratios, which measure the
monthly payment on the typical house against incomes or rents, have
not been quite so subtle.  Slightly below-average valuations
have combined with absurdly low interest rates to produce payment
ratios that are easily at all-time lows since the data
started.  The  payment to income ratio and payment to rent
ratios are, respectively, 45% and 40% below their historical median
levels:

As I am always careful to point out, the price-based ratios are far
more important than the payment-based ratios in determining whether
homes are fairly valued.  This is because the impact of rates
is, unlike those of incomes and rents, ephemeral and
undependable.  However, in certain situations, individuals who
are considering a home purchase may be more interested in the
payment ratios.  I discussed this distinction at length in a voiceofsandiego.org
article early this year, so I won’t rehash it here.
Readers should note, however, that both price- and payment-based
valuation ratios have improved since that piece was written, further
moving the dial towards a home purchase making sense under certain
conditions.