Well… single family home prices look like they dropped a lot last
month, but I suspect there is a lot of noise in that data point. In
specific — the price per square foot was down 5.6% from May. Though
I think current valuations are unsustainable and wouldn’t be
surprised by declining prices, that’s just too big a decline in one
month to be “genuine.”* Supporting this idea is the fact that condos
(usually much more volatile than single family homes) only dropped
1.5% in price/sq ft terms.

*(What I mean by this is, the price per square foot is a pretty
crude proxy for how much a given house has changed in value. It can
get thrown off by compositional effects such as people buying more
low price/sqft homes in cheaper areas, or fewer homes in expensive
areas, etc. This is what I’m talking about when I allude to “noise”
or the decline not being entirely “genuine.”)

So let’s wait for the Case-Shiller index on this one, and in the
meantime say that prices likely dropped last month but not as much
as that stat makes it seem.

Anyway! Interest rates are biting in other areas too. Here’s pending
sales — down 21% from the prior month, and 40% from a year ago: 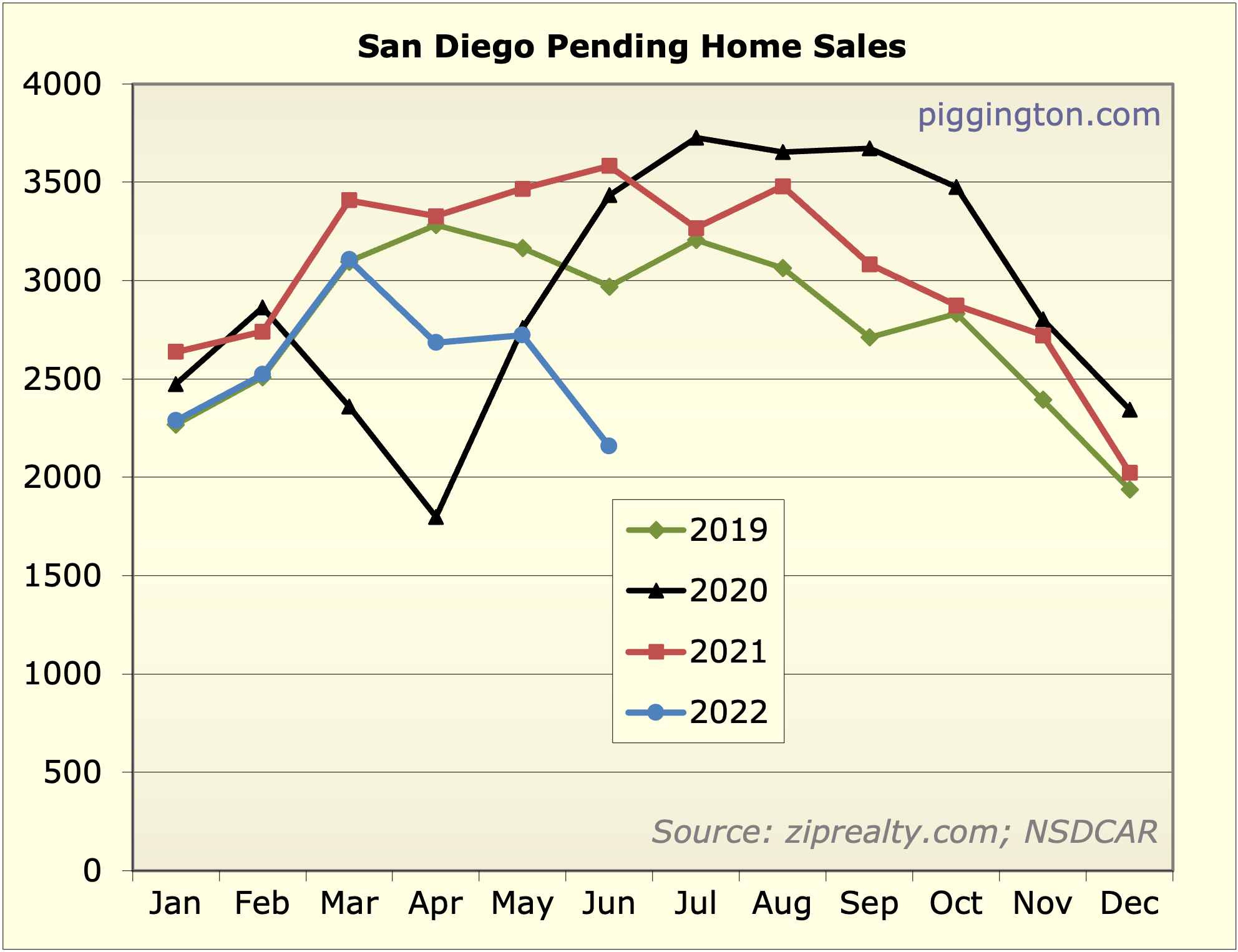 Inventory — up 27% for the month and also (by coincidence) for the
year: 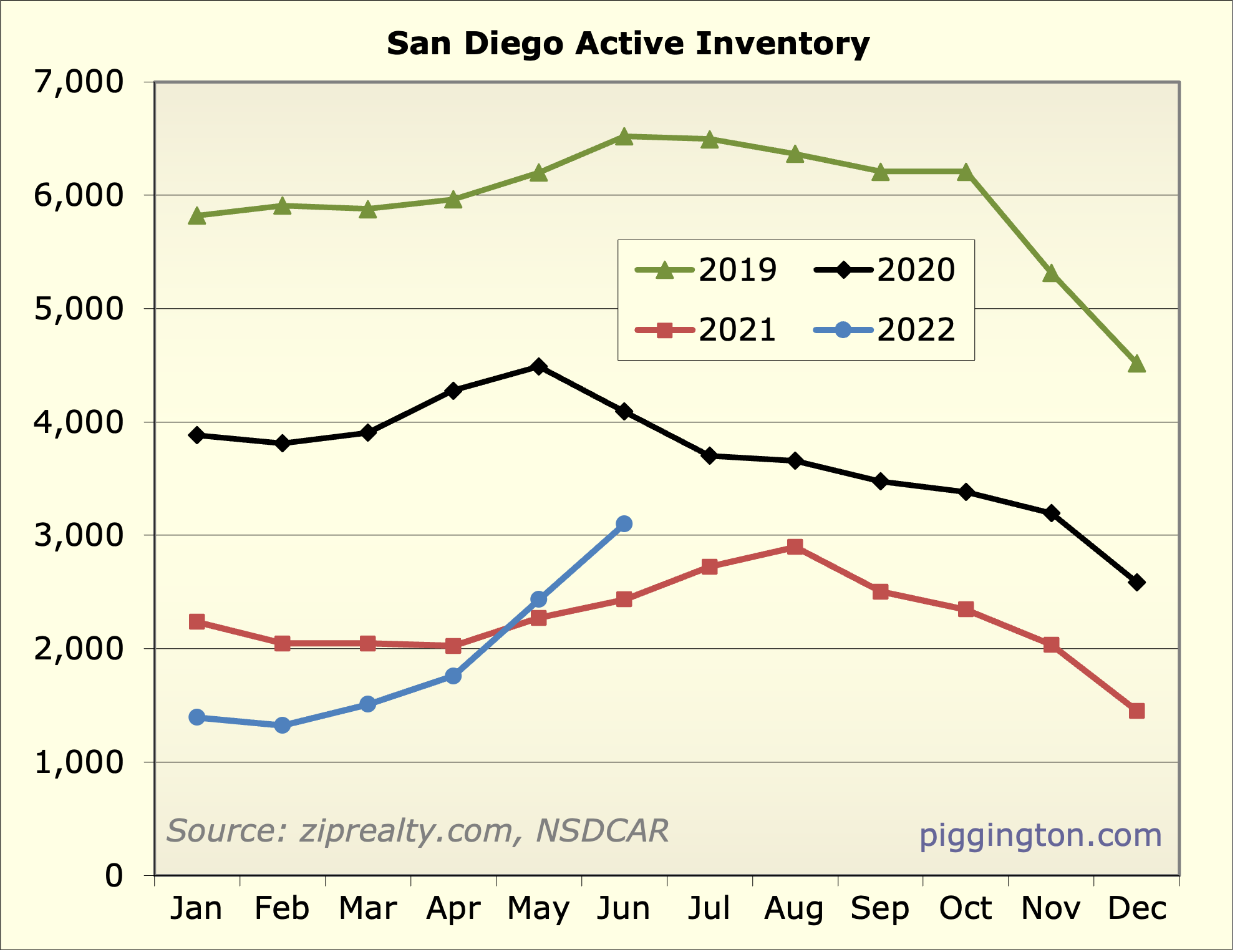 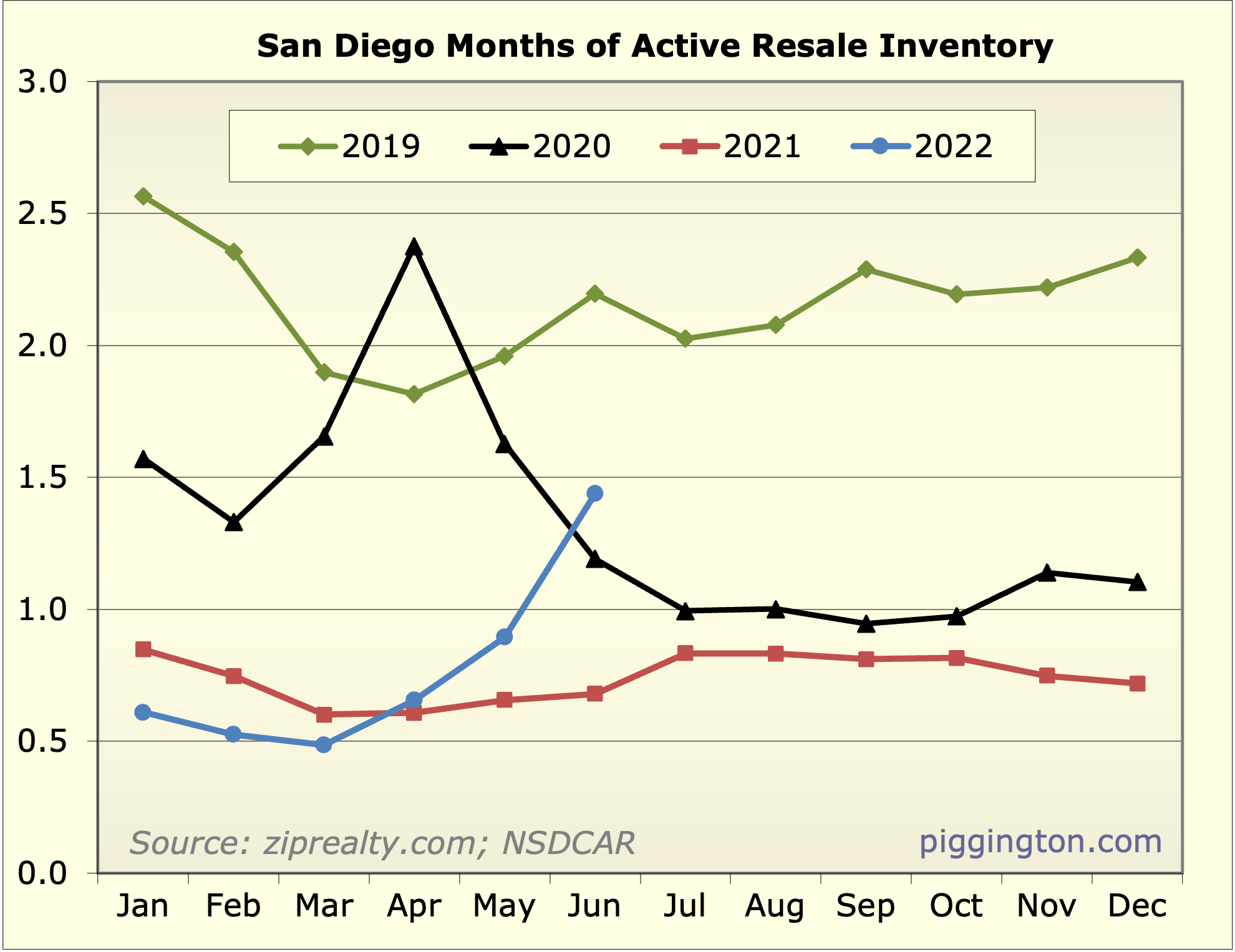 Now those are some pretty eye-popping numbers, but it must be
remembered that months of inventory started out VERY low, so an
increase can be huge in % terms without being all that big in
absolute terms. So, let’s put that into historical perspective: 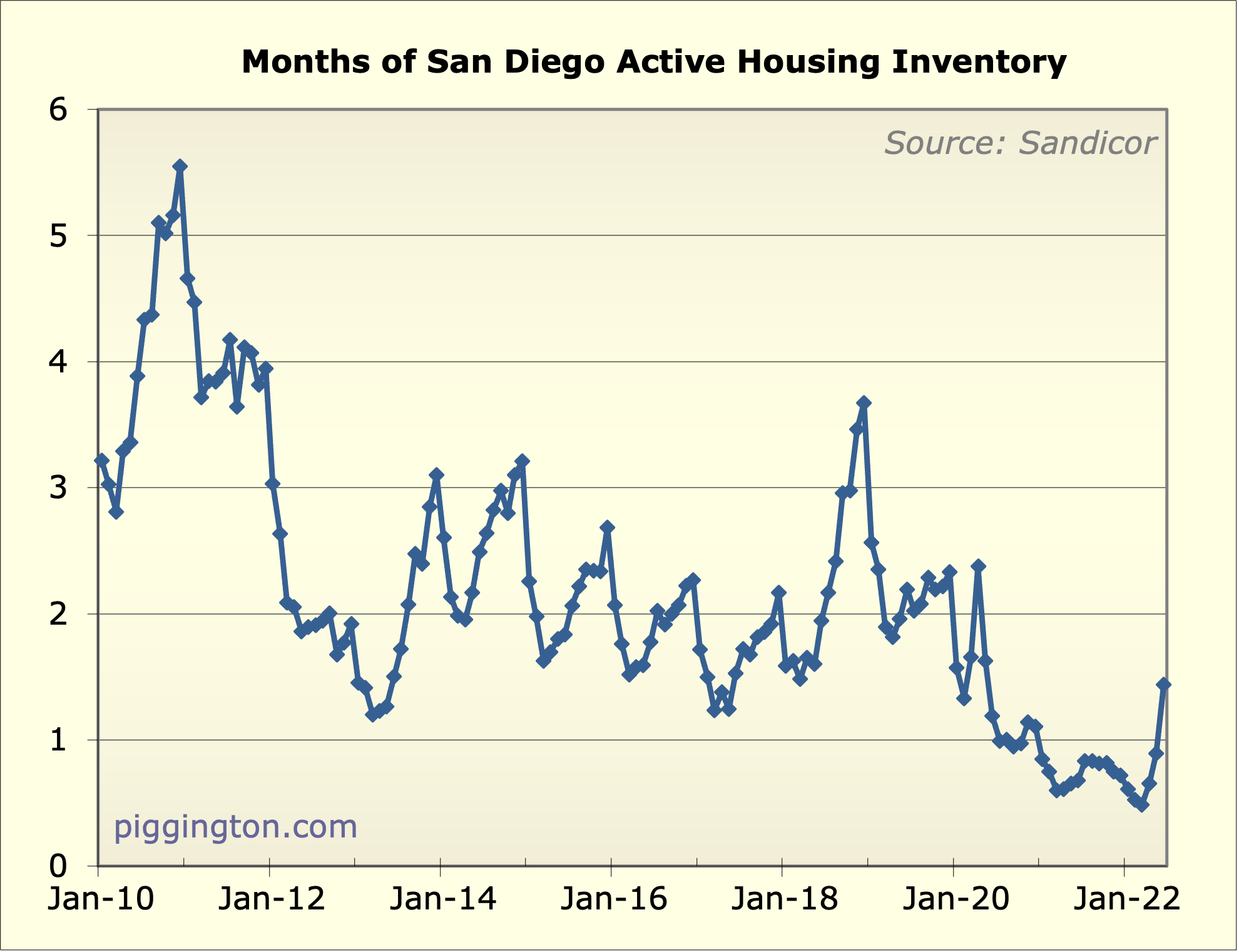 The increase is quite dramatic, but the absolute level is still on
the low side of the post-crash period. This is actually a fairly
healthy level of inventory. The question is whether that line keeps
moving up. My guess is that, at this combination of prices
and rates, it will. 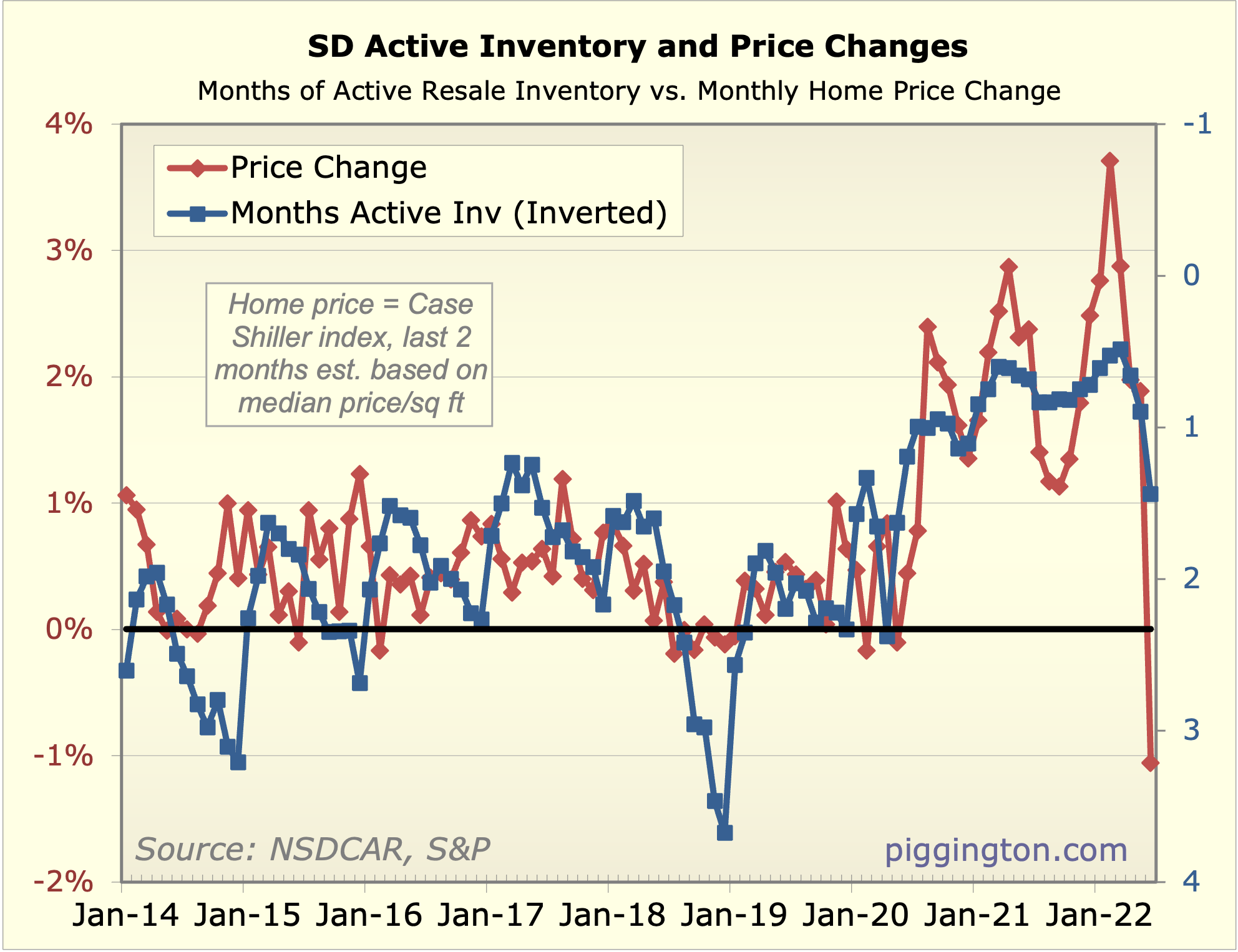 You can see that these have tracked pretty well together for the
most part, until recent months’ wild swings. The abrupt drop in
prices (the red line) last month doesn’t really match up with the
level of inventory (the blue line) is, which is another reason I
suspect that the drop is not totally for real. However, note that in
prior months, prices went up faster than inventory would have
suggested — so we should expect to see some “give-back” as the
market digests the price overshoot.

Back to the main point here… the current level of inventory is on
the low side (high on the graph), but in the range of normalcy and
conducive to higher prices. But this metric has been rising fast,
and if that continues, it’s a bad sign for prices.

Let’s see, what else… hey! Rates came down a bit. Which helps, but
this graph shows that it wasn’t really enough to make a difference.
The inflation-adjusted monthly payment remains near record levels. 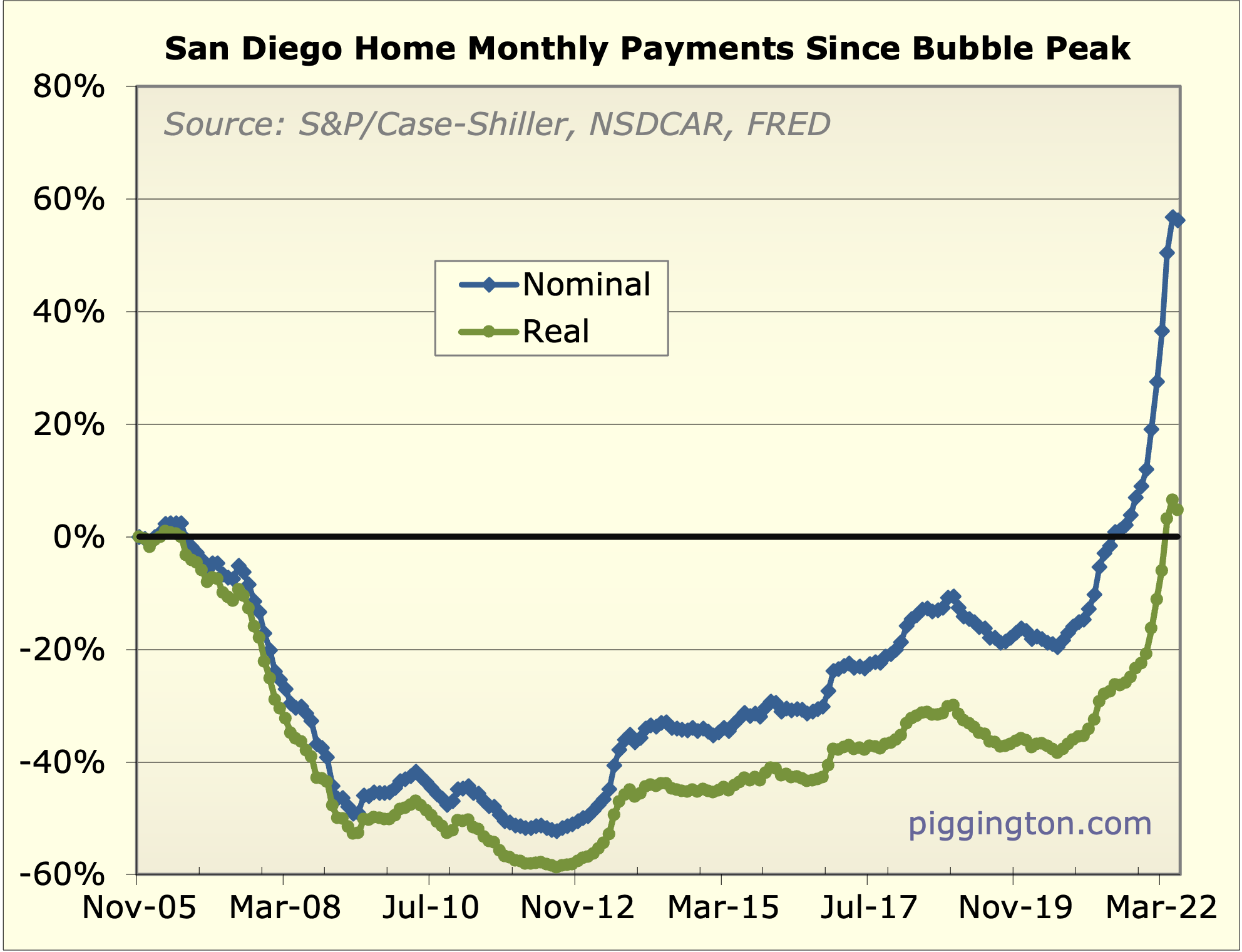 And inflation continues to rage, just hitting a new high. This is
negative in terms of its potential rate effects, but positive in the
sense that rising nominal rents and incomes help reduce home
valuations with nominal prices having to decline.

This chart is actually the one that I find nuttiest: combining the
effects of home prices changes, and interest rates, the monthly
payment on the same home has increased by 50% from a year
ago. (If you were lucky enough to have your incomes keep up with
inflation, which the average person has not been, then they are up
“only” 38%). 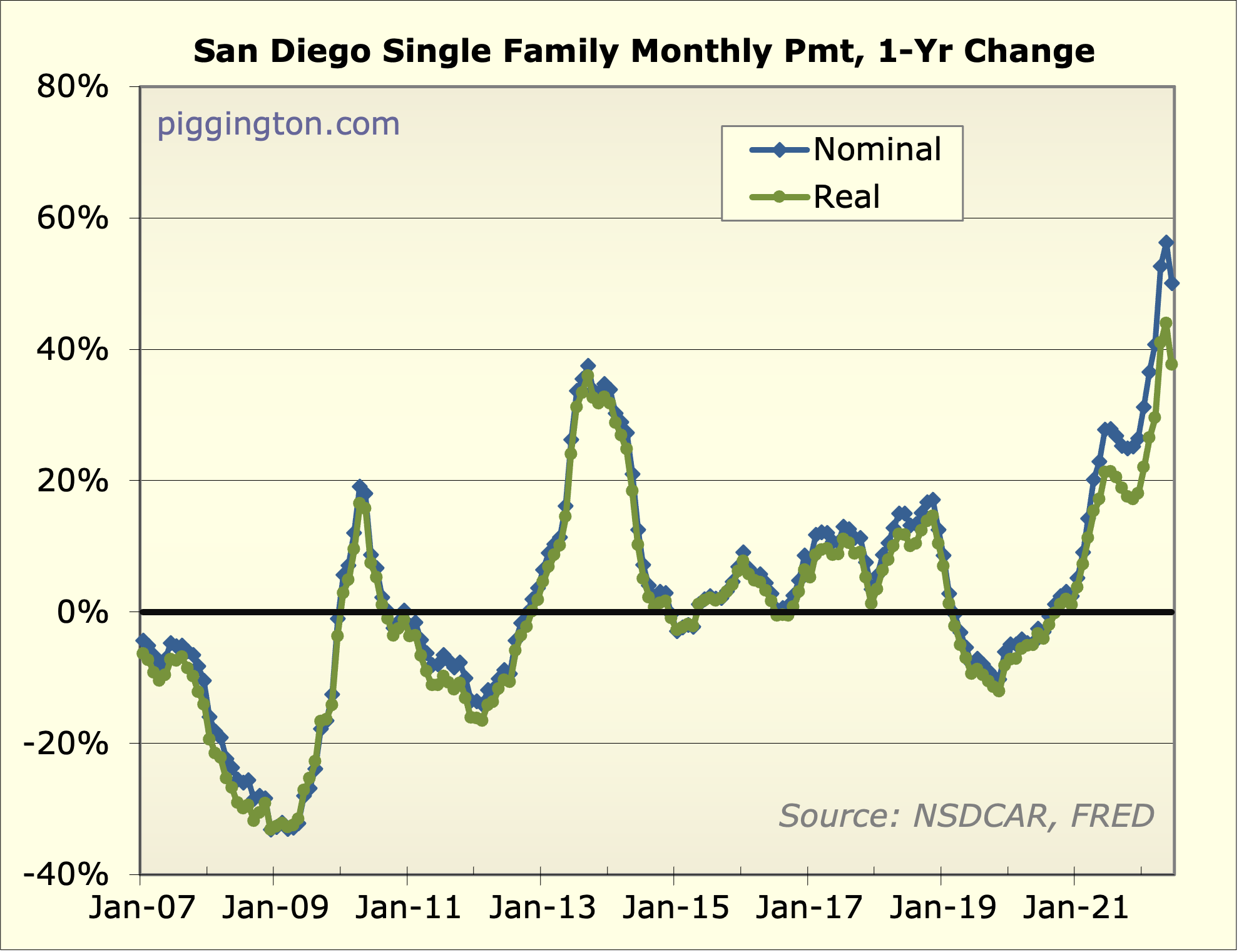 We did have high-30s percent (real) annual monthly payment increases
in 2013, so it’s not unprecedented. But now go and look at the prior
graph, and you will see that because that surge started from such a
low level, it ended with real monthly payments ~45% below current
levels. So back then, there was a lot of room to grow. Not so much
now.

May you live in interesting times, and all that. 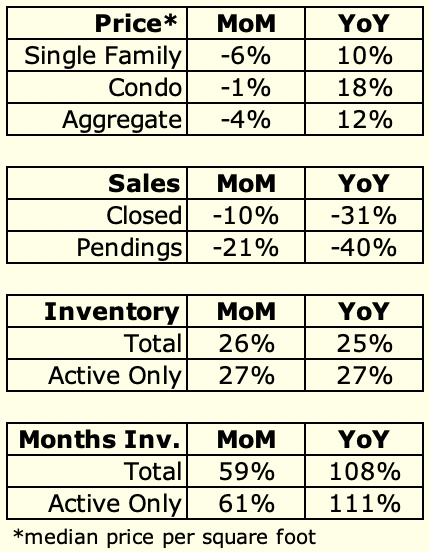 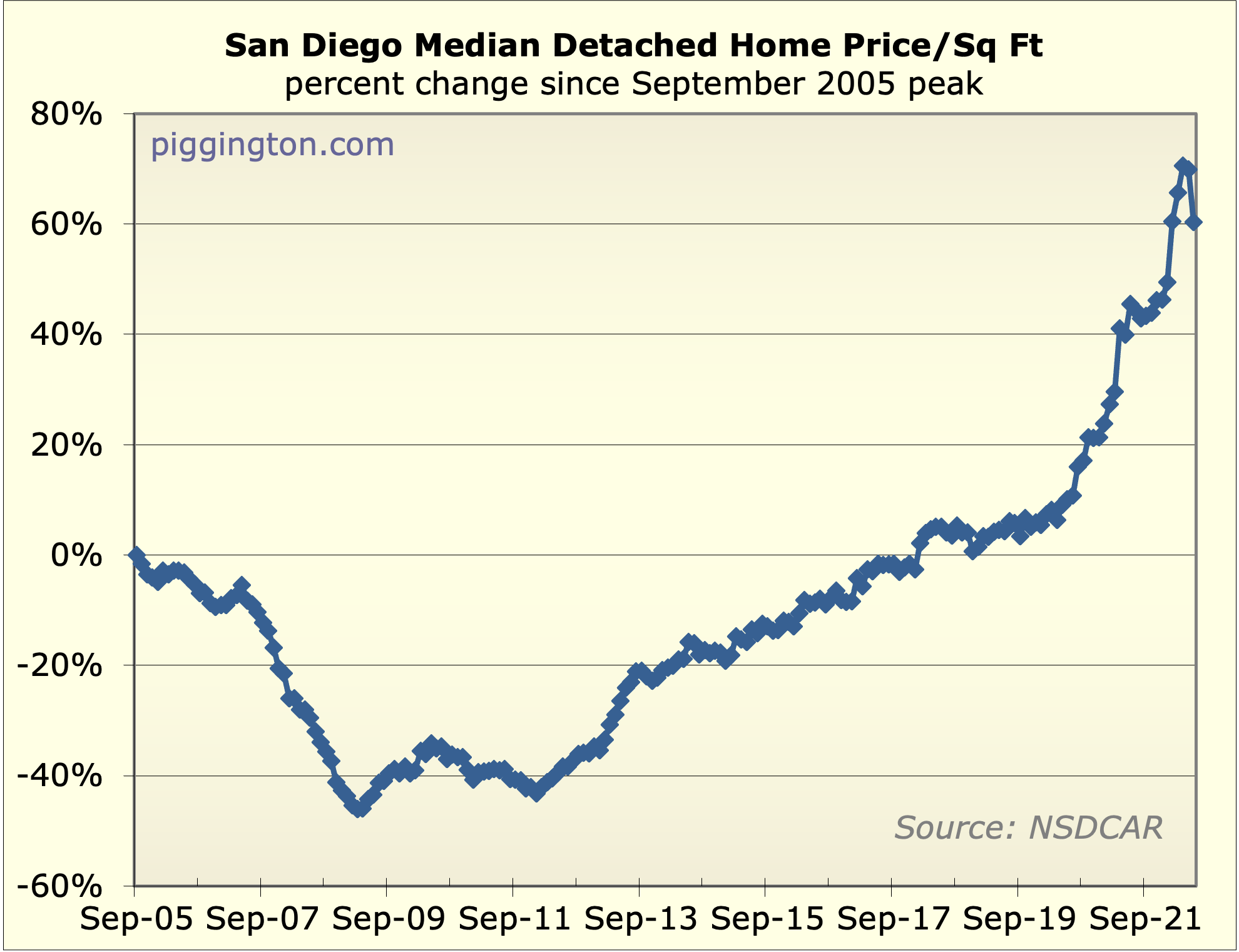 May housing data: something’s got to give July 22 housing data: more evidence of price declines, and another jump in months of inventory